On 23 October 2009 in Hechingen, Germany, the Second Monarchy Forum, organised by the German Monarchists Society, starts. Participants from different lands of Germany as well as from France, Austria, and Czech state came to Hechingen.
In the beginning of the Forum greetings from the Russian Imperial Union-Order to the Forum was read by Mr Andreas Haas:

Dear friends!
The Russian Imperial Union-Order, the oldest and largest Russian monarchist organisation, established 80 years ago, is very glad to greet the Second Monarchy Forum in Hechingen, Germany.
The German and Russian people have a common history which is full not only of sad pages, but also, and more importantly, of bright examples of cooperation and collaboration. A lot of German specialists served the Russian monarchy from the 17th to the 20th century. Today our countries are experiencing a difficult situation of a systematic crisis of spiritual values, ideology, and economy. To overcome this crisis our people need to tear up by the roots the mistaken ideals of the last several decades and to return to the Tradition which was has proven itself throughout centuries and which was developed under the wise rule of our Emperors.
We sincerely hope that your forum will be one of brilliant possibilities to underline that monarchists can propose real alternatives to republican rule, that Monarchy is the only real future for the history of our countries.
The Russian Imperial Union-Order wishes the forum to work successfully and hopes for further effective collaboration with German monarchists.
With Imperial regards,
George A. Fedoroff,
Commander of the RIU-O

Chancellery of the Commander of the RIU-O
Автор: A Legista на 03:09 Комментариев нет:

The Third Congress of the RIU-O was held in Moscow

From 8th to 10th October 2009 in Moscow the Russian Imperial Union-Order held its Third Congress in Russia dedicated to the 80th Anniversary of the RIU-O. Delegates from 14 territorial departments of the RIU-O participated in the Congress, including delegations from the USA and the Czech Republic. Delegates came to Moscow and were registered on 8 October. To read more and to see more photos...
Автор: A Legista на 03:51 Комментариев нет:

The RIU-O celebrates the 80th Anniversary 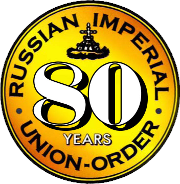 The oldest and the biggest organisation of Russian monarchists the Russian Imperial Union-Order celebrates on the 8th day of October 2009 its the 80th Anniversary.
During these 80 years our organisation went the way from a little union of officers-emigrants, who came together to a cafe in Paris on the 8th day of October 1929 to unite their efforts and abilities to serve to the Historical Monarchical Orthodox Russia, to the Order which unites Russian legitimists in more than 30 different regions of Russia and abroad.
Because of such anniversary from 8 to 10 October 2009 the Russian Imperial Union-Order holds its the Third Congress in Moscow. Information about the Congress you can find at the site www.legitimist.net in Russian and English.
Chancellery of the Commander of the RIU-O
Автор: A Legista на 13:47 Комментариев нет:

Her Imperial Highness the Dowager Grand Duchess Leonida Georgievna, a Dowager of Grand Duke Vladimir Kirillovich, a Head of the Russian Imperial House from 1938 to 1992, and a mother of a current Head of the Russian Imperial House Grand Duchess Maria Vladimirovna, celebrates today 95th anniversary.
Grand Duchess Leonida Georgievna was born on the 6th day of October 1914 in Tiflis (current Tbilisi, a capital of Georgia) in a family of prince Georgiy Alexandrovich Bagration of Mukhrani, a representative of the Royal House of Georgia, baptised in Christianity in 298 AD and ruled in Georgia from 575 AD to 1801 AD, and princess Elena Sigismundovna from Polish noble family of Novina-Zlotnicka.

From 1948 to 1992 Grand Duchess Leonida Georgievna was married to Grand Duke Vladimir Kirillovich, in 1991 they visited together the Soviet Union. From that moment Grand Duchess visited Russia several times. She has awards of the Saint Orthodox Church.
Official congratulations to the Grand Duchess were received from Holy Patriarch of Moscow and All Russia Kirill.
Chancellery of the Commander of the RIU-O
Автор: A Legista на 01:24 Комментариев нет: